A feature documentary about the life of Kangyur Rinpoche

Who was Kangyur Rinpoche? One of the first Tibetan Masters who, heeding the imminent danger to Tibetan Buddhism during the Cultural Revolution of the 1950’s, braved the arduous journey over the Himalayan Mountains to India, rescuing many thousands of Buddhist texts that otherwise faced potential extinction.

The journey took over three years, was undertaken on foot, accompanied by his young family, and involved immense physical hardship.

Once in Darjeeling he built Orgyen Kunzang Choling, a Monastery at 54 Gandhi Road. It was at this address, where the few single-minded Westerners, at the time in search of a more meaningful life, began to arrive.

Their meeting, although brief (with Rinpoche’s passing in 1975), eventually had an extraordinary widespread effect – directly contributing to the Dharma’s spread throughout much of the Western world.

The Return to Gandhi Road project

Return to Gandhi Road is a feature documentary project on the extraordinary life story of Kangyur Rinpoche and of the select few Westerners who discovered him in Darjeeling India in the early 1970's.

Guided by Kangyur Rinpoche’s two sons, Tulku Pema Wangyal Rinpoche and Jigme Khyentse Rinpoche, and with appearances by all of Rinpoche’s family, as well as those first Westerners to have met him in the late 1960’s, Return to Gandhi Rd will be a direct encounter with a man who’s little known, yet utterly extraordinary actions, led to such a widespread positive affect on the lives of tens of thousands people to this day. 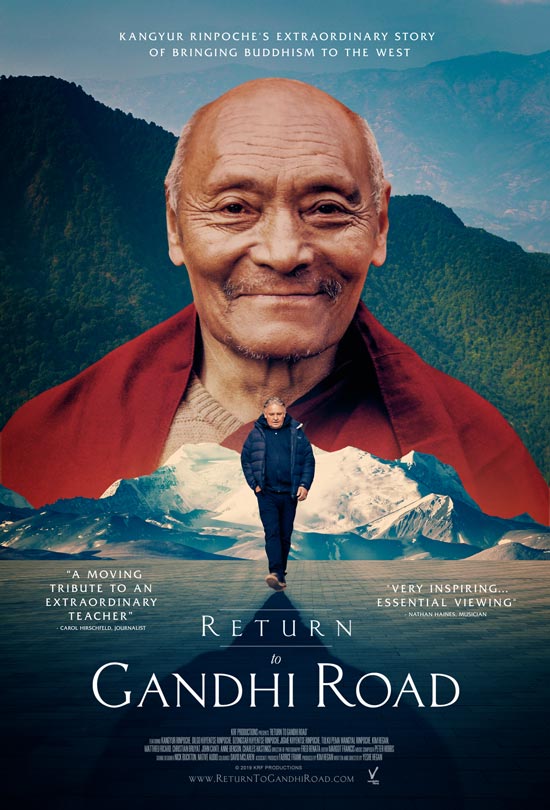 How can you see the film?

The film is currently being released in international film festivals and in cinemas in a few countries. It will be released On-Demand over the internet in the future.

To be notified when and how you can see the film, please join our emailing list.

If you represent a film festival or distribution company, please contact us.

Cinema release in Australia and NZ by Vendetta Films

Distribution in other countries will be announced in the future.

A dedicated bank account has been opened and all contributions will go towards essential film costs.

Producer: Kim Hegan
After 40 years producing live events and for television, Kim now puts his production skills to a project close to his heart. www.hegan.co.nz

Director: Yeshe Hegan
Yeshe has a degree in filmmaking, and experience as writer/director on a number of short films, including documentaries.
Example short films: Larkings Landing (documentary), Live! (short film).

Director Of Photography: Fred Renata
Fred is one of New Zealand’s renowned DOPs whose work has crossed all mediums, from music videos and commercials, to TV series and feature films such as Mt Zion. He has also shot many well known and acclaimed documentaries, including the recently released Poi E: The Story of Our Song.

Editor: Margot Francis
Emmy award winning Film editor Margot Francis has extensive experience in film and Television both in New Zealand and the US.
Her TV highlights include Saturday Night Live. She also worked on Bette Midler's TV movie The Mondo Beyondo Show and more recently Billy T: Te Movie. She won an Emmy Award for a documentary on the Broadway musical Voices of Sarafina

Australian & NZ Distribution: Vendetta Films
Vendetta Films has been acquiring and distributing films around the globe for over a decade, becoming one of the top independent film distributors in Australia & New Zealand.

If you have any question, please use this form to send us an email. We will answer you very quickly.

How to contribute to help this film become a reality

A dedicated bank account has been opened and all contributions will go towards essential film costs.*

This film will be produced in stages.

*Should the production reach full funding, all surplus will be donated to The Kangyur Rinpoche Foundation, a foundation established by the family to carry on relevant charitable works.